Garter snakes are common throughout both Northern and Central America, ranging from Canada to Florida, and grow to around 3 feet (up to 1 meter or so) in length.  There is some debate about how they came about the name Garter is said to have driven from the stripes that run lengthwise on the snake, in red, yellow or white, looking like a gentleman’s garters holding socks up.  Alternatively, it could be a derivation of the German word for ‘garden’, which is where they are commonly seen. 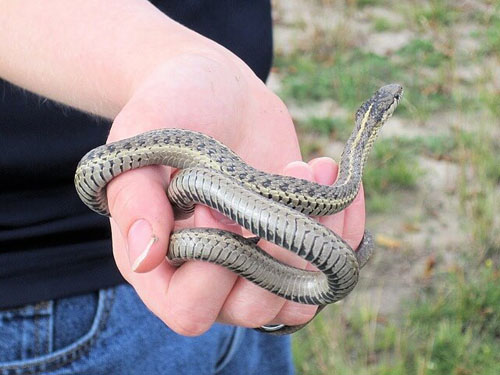 The Garter has a checkerboard spot pattern either side of the central stripe on their back which is quite distinctive.  Garter snakes have three stripes, one central and then one on each side of the body lower down.  Generally, the stripes are yellow or greenish.  This cannot be taken as an absolute though as some species are almost without stripes.

Colour is not a good guide as they come in black, brown, green or reddish – and can have pale green or yellow underneath.  It is the ‘Garter’ patterning which will be the giveaway that you are dealing with a Garter snake.

A rather unusual way to be able to identify your Garden snake would be to get him to stick out his tongue – many species of Garter Snake have a two-colored tongue.

They are nicknamed Garden snakes because they are often found in gardens, so you will be more likely to see these than other species.  The bask in the sunshine on exposed warm areas, which is when you are most likely to see them in your garden.  They hibernate in large groups and can be found underneath piles of leaves or underneath rocks.  One den in Canada is reported to have housed over 8,000 snakes!  Garter snakes like to be close to water, especially in arid areas.

The Garden snake is quite fast moving and is mostly ground-dwelling.  They have been known to swim and climb small shrubs or vines.

The Garter snake feeds mainly on earthworms, fish, and amphibians, although not exclusively.

You are more likely to see a Garden snake during the daytime unless it is really hot.  Like all reptiles they move more easily when they are warmed by the sun.

They are not venomous but will eject a foul-smelling musky fluid should you try to handle them, and they will strike, although it is the bite that can cause injury rather than venom causing poisoning.

The Garden or Garter snake has over 30 species within the category.  What do Garden snakes look like?  It looks like a Garter snake!  What do Garter snakes look like?  They look like Garden snakes!  To be more precise than that means you have to concentrate on the similarities between the species – is it in your garden?  Does it have three obvious stripes?  A checkerboard pattern?  Do the colors fit within the possible parameters?  They are not likely to cause you any issue at all, and there is no need to be concerned.

Kyle Baxter is married with one young son. A very short career in investigative journalism, and a particularly unfortunate experience over the purchase of a major household appliance that took many months to resolve when he could ill-afford the costs led Kyle to his current position as a consumer champion. When not seeking out guidance on the best-on-the-market Kyle enjoys watching baseball and tries to get away from the house long enough to do some off-road cycling.